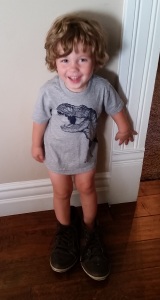 I adore watching my 3 year old son attend to a task and persevere. This morning he got himself out of bed, announced he had to “go pee pee” and marched into the bathroom by himself. He still wears a nighttime diaper, so he requested help getting the diaper off. I responded, “Try it by yourself, first.” He carefully placed his ball on the counter, plopped himself down, and then tried about 3 different ways to get the diaper off before he was successful. At no point did his tenacity wane, and when he got the diaper off he looked up and said,

Once he was done with the deed, he sat down and put his jammie pants back on. Again, he failed on his first attempt (both feet went down the same leg). So he pulled his foot out and tried another method. This time he stuck his arm down the correct path as if to clear the way. With this, he was successful. Upon further inspection it turns out that along with having on no undies, his pants are also on backwards. Did I tell him to take his pants off and try again? Absolutely not, because he completely the task well enough and he did it independently. When finished, he trudged upstairs to my husband and announced, “I went pee pee. I took my diaper off like undies!”

Furthermore, the incentive to complete the task had nothing to do with an external bribe or reward. No points or stickers. Just pride in completion. The risk was also low. It’s not like I was going to call his parents if he didn’t complete the task. He knew he would simply get help. Do we offer students small enough steps that they can climb independently, allowing them to feel that pride of completion? Are we developing autonomy in our students, where they know what the next step is and how to get up it? Are we letting students discover fun and complex concepts on their own, allowing them the thrill of self-discovery!?

Here are some thoughts I have after watching my son remove his diaper:

As parents of young children, we love watching them explore new worlds, making sense of this place around them. We ask questions, we guide lovingly, and we revel in their celebrations of their own success (“I did it!!”). And then something happens in the primary years. We seem to think these are ok until about 2nd grade, but by 3rd grade we expect them to be little adults. We forget that they are still children. There is still a 3 year old inside of them. We forget that some of them are still struggling to put their pants on the right way round. I say “we” because I am guilty of this, too. When I visit my ten year old nephew, it seems unreal to me that he is the same boy as in the 5th grade classes I visit. He is just a boy. I see the boy in my nephew. I hope his teachers do, too.

Tell me your thoughts... Cancel reply